To politicize something means to inject politics into a previously politics-free subject. "Politics" in this context can mean several things. At the most straightforward, it means connecting a thing to electoral or legislative issues, e.g. using the Ebola outbreak in West Africa to talk about the US-Mexico border in order to convince people to vote for conservative candidates and endorse conservative immigration laws. However, in many cases "politics" means something broader: while gay marriage and non-discrimination laws are political in the above sense, many issues relating to gender & sexual minorities have nothing to do with the government; yet trans and gay visibility are seen as inherently "political". Similarly, not all feminism is connected to legislative or electoral efforts, but feminism is similarly considered thoroughly political. In this sense "politics" and "political" tend to relate to the presence of conceptions about how the word does or should work; it is either used synonymously with "ideological" or to refer to the praxis of an ideology. With that broader meaning, politicizing something would mean injecting any amount of ideology into something that was previously completely ideology-free.

The problem with this is that nothing relating to human interaction is ideology-free. There are only ideologies we notice, and those we do not; similarly, there are invisible and visible politics, but nothing social that is truly politics-free.

At this point, I should clarify what "invisible" means here. Things can be invisible because they fly below people's radar, are rarely encountered, or are otherwise hidden; that is not what I'm talking about. Here, invisibility comes from ubiquitousness: people don't think they and people like them have an accent (it's all these other people who do) because they're acclimatized to it so that it has become their default[1]; similarly, certain assumptions about the world are defaults, and thus normalized and not perceived as even existing[2]. These base assumptions tend to connect up to form entire "naturalized" (as in: "that's just the way things are naturally/normally") ideologies[3].

Default worldviews are just as ideological or political as others, but their underlying assumptions are not usually noticed, i.e. they are invisible; thus, these worldviews are thought of as objective or purely reality-based. In contrast, any alternative view or critique of the default will have noticeable (or even explicitly stated) base assumptions, and will thus be viewed as biased, subjective, or ideological. The introduction of such a critique or alternative worldview into a particular social space would therefore be seen as "politicization" of that space. As noted though, they already have politics in them, they're just politics of the status quo, as imperceptible to us the same way our own local accent is; or the way the grammar of one's own language is followed without necessarily explicitly knowing its rules (i.e. the way young children use & understand it). Feminist critique of video games does not "politicize" them; they already had male-centered politics in them (and some games are explicitly about ideologies and politics *coughbioshockcough*). Shining a light on homophobia in sports does not politicize sports; they already had the politics of heteronormativity in them. Criticizing racial underrepresentation in STEM is not politicizing academia; it has already been full of white-privileging politics, and quite explicitly so until very recently. And so on.

The invisibility of dominant ideologies also means any attempt at making them visible first faces a lack of language to describe the issues[4], and later is likely to be attacked as making things up and playing the victim. It is somewhat analogous to what it would be like to be the first person ever to try to describe English grammar: one would have to unmask and name features no one previously even considered might exist. Reactions by others might also be similar: being the first to claim there are specific rules, patterns, and structures to something people learn "naturally" and navigate fairly well without ever learning any rules for would likely result in the grammarian being accused of making up conspiracy theories about shadowy English-designing cabals forcing people to speak according to "rules".

Lastly, that only the non-default worldview is even identified as a worldview (rather than objective truth) works to the advantage of currently dominant worldviews. "Politics" and "ideology" are both terms with negative connotations in our society. Consequently, being able to accuse critics of "politicizing" or "injecting their ideology into" some aspect of culture or society without risking the same accusation is a useful weapon in defense of the status quo. Similarly, one can accuse critics of bias or subjectivity while being able to claim objectivity for the dominant perspective. This is how it is possible for men to say that they have an objective outsider perspective on gender-related issues or how conservative Christians can connect their religion to the Republican party while at the same time claiming that Islam is different than Christianity because Islam is a political ideology.

None of these attacks are accurate. All social things already have politics in them; all people are biased, subjective, and political, whether that's in favor of dominant ideology or a different one; no one is an outside observer to racial, gender, class, or other hierarchies; there are always social structures even when you don't know about them (just like your own language has grammar even if you've never learned any). The status quo is politics, and it's important to point this out.

(April 27, 2014) Gilbert, Ariz. – As part of his effort to reach out to underrepresented groups, particularly those who are viewed as politically risky to support, congressional candidate James Woods is hosting an Atheist Media Day today. Woods, who is running for the US Congress in Arizona’s Congressional District 5, is an atheist himself and believes a healthy democracy needs to include all voices. Woods believes the political system in the United States cuts too many people out of the process.

“There are a lot of misconceptions about people who don’t believe in God,” said Woods. “Because of the negative stigma, lawmakers aren’t seeking out atheist constituents and asking how we want to be represented. They’re afraid of the political fallout. But how can you make sure government is serving all Americans if you don’t allow marginalized groups of people to talk about what they need?”

According to the Pew Research Center, one in five Americans—and a third of adults under 30— is agnostic, atheist or not affiliated with any religion. By large margins they view religious organizations as too concerned with money and power and too involved in politics. Despite these numbers, Woods says elected officials spend a lot of time meeting with religious and interfaith groups but are avoiding atheist groups.

Woods reached out to a number of nontheistic reporters and organization heads to set up interviews and make himself available to members of the secular community. He hopes that media directed to secular Americans on Atheist Media Day will help that community feel heard—and that people unfamiliar with atheism will learn that the atheists do not fit the stereotypes typically assigned them.

Leaders in the secular movement are expressing support for the outreach effort. “I was really excited to hear about James Woods deciding to reach out to atheists, humanists, agnostics and other nontheistic people,” said John Figdor, a graduate of Harvard Divinity School who is currently serving as the Humanist Chaplain at Stanford. “Our voice is often unheard, despite the fact that 32% of people identify as nonreligious.”

Arizona State Representative Juan Mendez, who made national headlines last year when he opened the legislature with an atheist invocation rather than a prayer, applauded Woods as well. “People around the country feel cut out of politics and social justice work because they don’t see their values articulated by their representatives,” Mendez said. “When James talks honestly about his Humanism, it provides a kind of representation people have been hungry for. We need more inspiring and honest leaders like him.”

Woods says he is planning similar events for other constituents who are overlooked by lawmakers. “I’ve been listening to people with disabilities, people from the transgender community and people whose immigration status is undocumented. They feel ignored, and that needs to change.”

It is no secret that the Republican Party has a problem with women voters and an edge with men. President Obama won women voters by 12 percent and lost men’s votes by 8 percent in the 2012 election. That cumulative 20 point difference between men and women voters was the largest ever observed since Gallup began collecting data in 1952 (Gallup, 2012).

However, that aggregate data obscures important variation. Known as the ‘marriage gap’, single and married women’s voting patterns differ.  Romney did better among married women than Barack Obama, 53 percent for Romney to 46 percent for the President. The opposite was true for single women, 63 percent of whom voted for Obama (McDonnell, 2012).

These figures help up to build up a mental image of the women who are most likely to vote Republican: white, married women.  Add in the information on religiosity (especially belonging to an evangelical form of Christianity) and income (the higher it is the more likely you are to vote Republican) and we can refine the picture of the reliably Republican woman voter even further.

That is what makes the results of a poll published this month so shocking to me. It seems that on the issue of a government shutdown, the GOP is manufacturing its own, unnecessary intra-party shutdown gender gap.  And it’s a big one.

David Winston conducted a national survey of 1,000 registered voters between July 31 and August 1, 2013 (York, 2013). Respondents were given the following question: ‘Some members of Congress have proposed shutting down the government as a way to defund the president’s health care law.” People were then asked to indicate if they were in favor of that idea or opposed to it.

For all respondents to the survey, 71 percent indicated opposition to the idea, 23 percent favored it.  For Republicans, 53 were opposed and 37 percent were in favor.  But what I found fascinating was the internal Republican gender gap the survey found.

Republican men narrowly support the idea of a shutdown, 48 percent in comparison with the 41 percent who oppose it. This number would indicate that the GOP is not wrong in pushing the idea of a shutdown, and this view reflects the plurality view of its base. It would seem to indicate that Senators Mike Lee and Ted Cruz reflect the views of the people who elected them.

After the 2012 election, an election characterized by the phrase ‘war on women’ and the meme ‘binders full of women’, the Republican National Committee published the results of a deep introspection – some called it an autopsy – of their 2012 election cycle.  In their ‘Women’ section, they wrote, ‘…when developing our Party’s message, women need to be part of this process to represent some of the unique concerns that female voters may have’ (RNC, 2013:19).

If we compare the political strategies offered by radical Republican members of Congress to these polling, the results the obvious conclusion is that the GOP hasn’t yet begun to listen to the women who voted for them, let alone women who do not identify as Republican.

Republican women might favor smaller government and less regulation, but they still want government to function. Those Republican women’s voices might not be the loudest in the room in a town hall meeting, or the most radical on issues of shutdown but Republican women are paying attention. Based on these poll numbers, if the GOP attempts to play chicken with the daily operations of the federal government those silent voices of women could turn into disappearing support at the ballot box.

As Congress reconvenes after the summer recess, elected Republican men, you have been warned.  Defy the silent majority of women in your party at your own peril (and voter base). 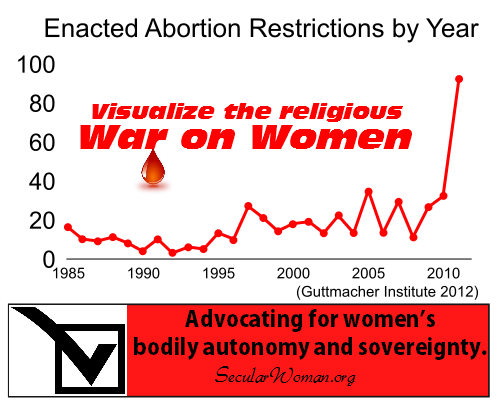