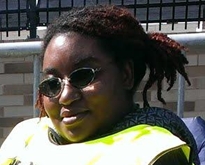 Niki discovered atheism early, and skepticism much later, after a few flirtations with New Age and a very, VERY brief reconsideration of Christianity.  Feminism came much, much later, though the basic tenets of bodily autonomy had always stuck with her while growing up in a religiously conservative home.

Now all grown up and educated in the school of hard knocks, she advocates and agitates for reproductive choice, skepticism, religious freedom, representation of racial, sexual, and abled minorities, and reaching those who, like her, often feel as if mainstream atheism isn't for them.  For Niki, the atheism and secular movements are intersectional, and must reach out to those outside of the 'box' if either has any hope of having a better standing in society. If it falls under the tent of social justice, she's usually there, ready to stand, and snark if need be, against bigotry.

Most days, Niki can be found working from home as a writer while battling the hydra that is fibromyalgia, depression and anxiety. On weekends, Niki walks the sidewalk as a clinic escort at Whole Women's Health Twin Cities. She is also training as an abortion doula for the SPIRAL collective, and makes hay as much as possible via social media. If there is ever a spare moment, yarn crafts, single-player RPGs, finding new and creative ways to swear, and her kitty, Weasel, keep Niki happy.