The new year is a traditional time to look back at what we’ve accomplished in the last year and forward to what we hope to accomplish in the next. Secular Woman would like your help doing that this year.

We’ve been quiet recently, but we’re trying to get better about bragging about our accomplishments. 2017 started with our president, Monette Richards, attending a meeting of secular organizations to represent the interests of women in the movement. We won’t say it was friction-free, but we made points that would otherwise have gone unsaid. The year ended with an update to our website and back-end systems to improve functionality and make updates easier in the future.

In between, we continued to host interesting discussions on our members-only Facebook page, ran the Secular Women Work track of workshops at Skepticon, and got mouthy when the secular movement decided our interests weren’t important. We also added two new board members to help us accomplish more in 2018. Please help us welcome Sam Farooqi and Stephanie Zvan!

We’ve already started working on projects for 2018, but we want your input on how we can do more. Please fill out this survey on what you’d like to see from us this year.

While you’re at it, please consider renewing your membership to Secular Woman. Your membership helps us help you (and keeps us from sending you another email soon when we run our membership drive).

Atlanta, Georgia – October 21, 2013.  For two weeks beginning today, student members of the Secular Student Alliance (SSA) and its campus affiliates are eligible for complimentary Secular Woman (SW) memberships. Open to all genders, the memberships entitle students who identify as women to benefits like conference travel grants and participation in the SW speakers bureau. Campus activists will receive the private membership link starting today in a series of e-mail updates from the SSA campus organizing team.

“Secular Woman is very excited about this new strategic partnership with the SSA,” said SW President Kim Rippere. “We are eager to tap into the energy and passion of these secular students as we build programs to increase diversity in the secular movement. We’re also hopeful that cooperation between Secular Woman and the SSA will help campus groups to attract and retain more women members.”

Secular identity organizations, both on- and off-campus, have struggled to expand women’s involvement. The 2009 U.S. Religious Landscape Survey of the Pew Research Center’s Forum on Religion & Public Life found women to be more religious than men in an analysis of responses about god-belief, church attendance, and prayer. The American Secular Census, an independent demographic and viewpoint survey of Secular Americans, reports that 41% of its registrants identify as women and that their involvement in secular identity organizations is more limited than men’s.

Secular Woman addresses this imbalance by providing resources and community to women seeking a higher level of engagement in secular activism. Since its launch on June 28th, 2012, the group has grown from a four-member board of directors to an organization of more than 650 supporters in nine countries. SW elected to reach out to students in this first membership drive because of SSA’s culture of opportunity for women and other minorities. Women’s participation in the SSA’s 410 campus affiliate groups has risen, as has the number of women serving as student leaders, according to SSA Director of Campus Organizing Lyz Liddell. Rippere says this finding adds conviction to SW’s vision of women “participating openly and confidently as respected voices of leadership in the secular community.”

SSA Executive Director August Brunsman agreed. “Students are shaping the future of the secular movement, and they’re shaping it toward gender parity. Can you picture a social movement succeeding without gender parity?  Because I can’t. Secular Woman is an organization whose time has very much come.” 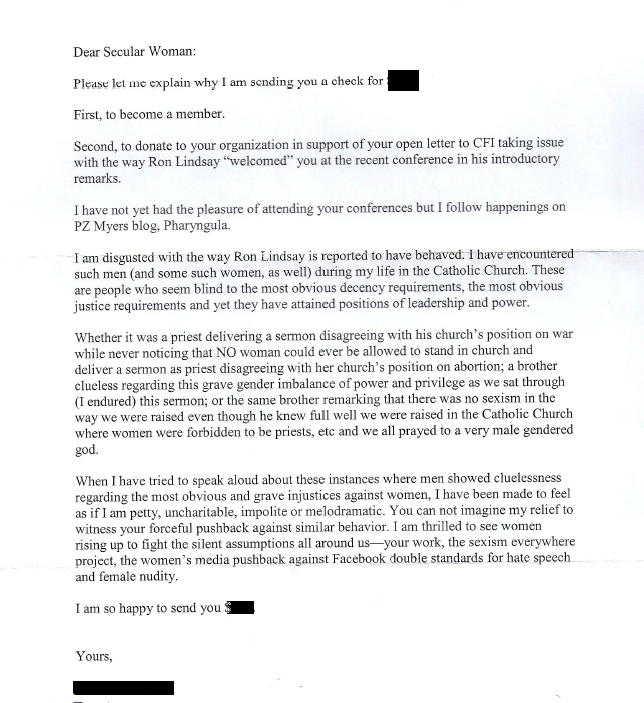