If you follow news about policing, you will already know that American society is by far the most incarcerated in the world, that black and brown people are enormously overpoliced compared to whites and given harsher sentences than whites for the same crimes, and that young black men in particular are killed by police at rates 21 times greater than their white counterparts. Many liberal-minded whites I know seem incapable of grasping the enormity of the injustice of all of that—which may be understandable given that their interactions with police have been generally much different, but is not excusable on those grounds. Of course many less-than-liberal-minded whites are openly defensive and hostile in response to anyone calling this what it is—systemic racism—in favor of all manner of victim-blaming and othering and authoritarianism and bootstrapping narratives that have about as much relation to reality as…well, as all things conservative generally do. This is why as protesters took to the streets in NYC (and across the nation) in response to police violence and the failure to hold accountable the cops who killed Mike Brown and Eric Garner, I was heartened to see people of every race among them, especially whites. I say this not to suggest these whites deserve a cookie just for being decent fucking human beings. They don’t. I say it because—and this really cannot be said enough—racism is whites’ problem to solve.

RACISM IS WHITES’ PROBLEM TO SOLVE.

See, there I said it again. And it is true in exactly the same way that street harassment is mens’s problem to solve. (The similarities to misogyny don’t end there, but that’s another post entirely.) It’s a tall order, to be sure, and will take a hell of a lot more than white people demonstrating and marching. The solution to police violence and mass incarceration of people of color does not just lie within the relationships between cops and communities of color—although it certainly lies there, too. It lies with whites interrogating ourselves about our participation in social, cultural and political systems that sustain racism—and committing to fucking doing something about it. Janee Woods wrote recently:

We’re 400 years into this racist system and it’s going to take a long, long, long time to dismantle these atrocities. The antiracism movement is a struggle for generations, not simply the hot button issue of the moment. Transformation of a broken system doesn’t happen quickly or easily.

People of color, black people especially, cannot and should not shoulder the burden for dismantling the racist, white supremacist system that devalues and criminalizes black life without the all in support, blood, sweat and tears of white people.

Here are some images I shot from Greenwich Street on December 4th around 8:00pm as protesters marched West on 11th Street. (Yes people, believe it or not I was actually roused from my bar stool—not by all the NYPD sirens of course, but by the protester chants I heard over them from a block away.) 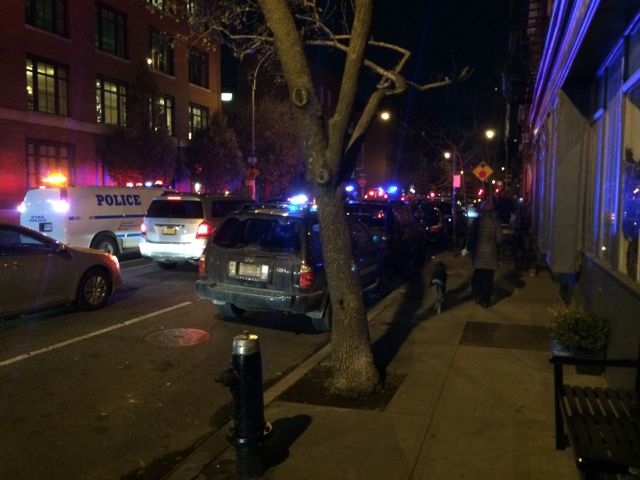 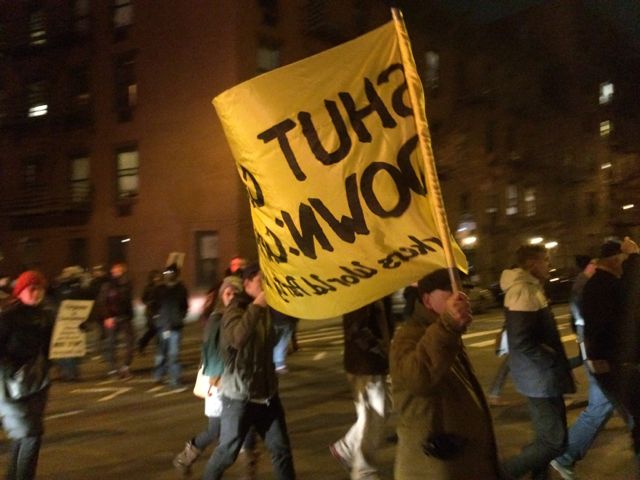 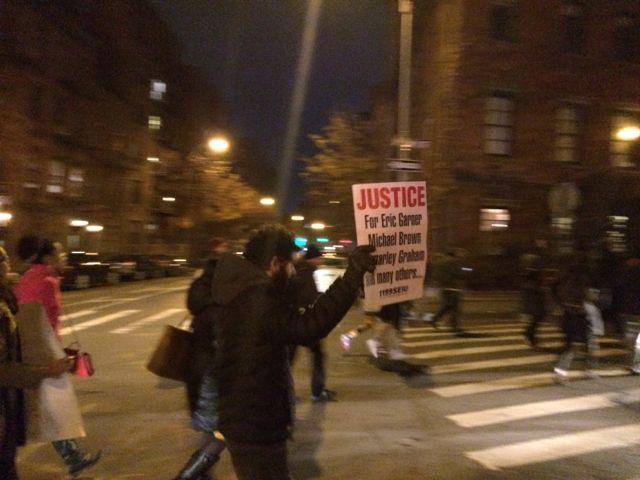 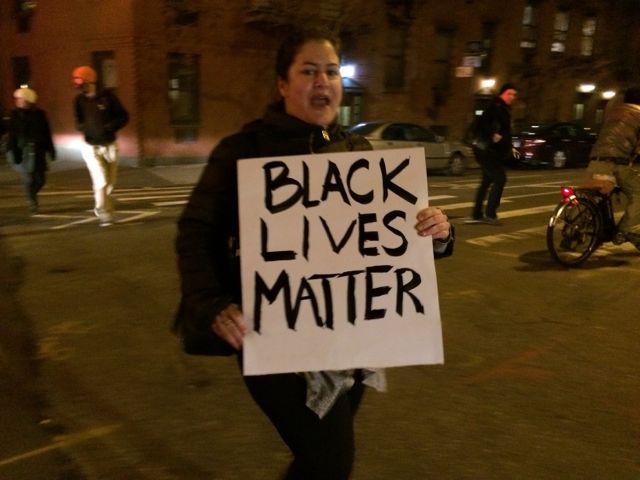 USA Today has a fantastic collection of photos from nationwide protests; here are a few from NYC. 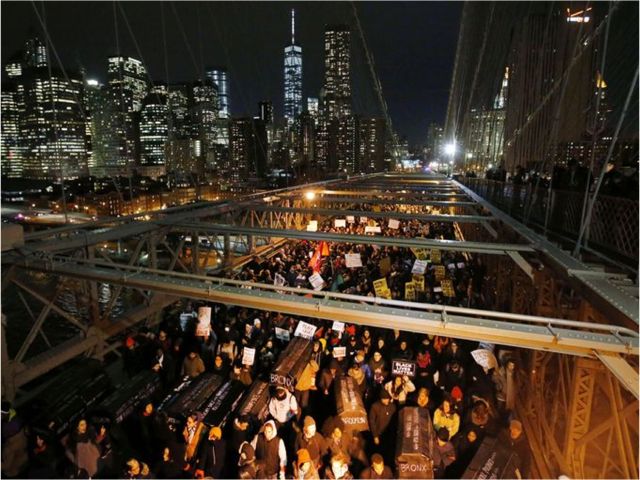 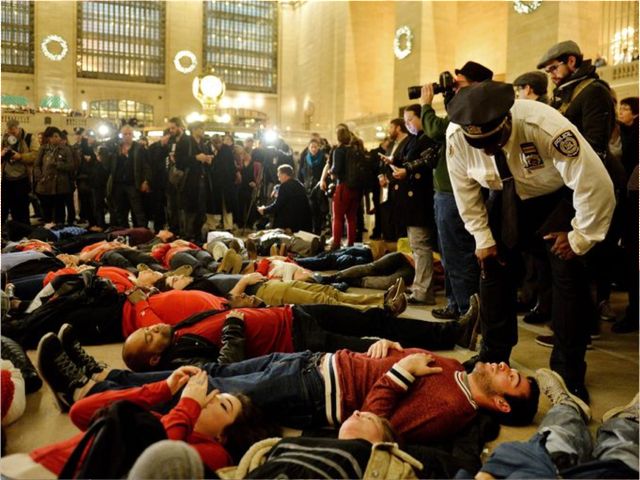 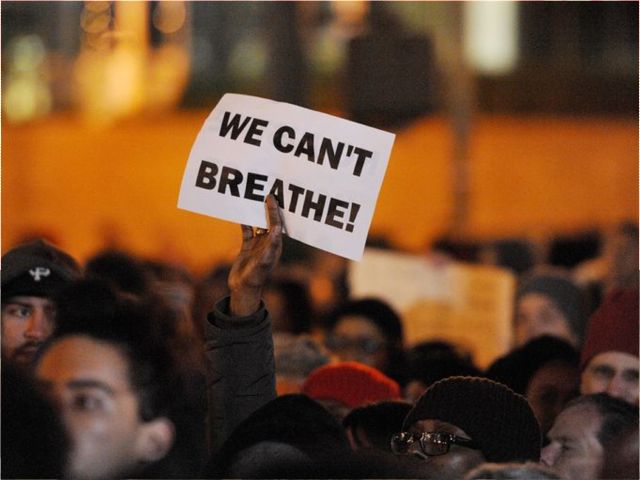 Back at the bar, a young woman came in, sat next to me and ordered a drink. We got to talking, as bar people do. She had just turned twenty-one a few days ago, and in a few weeks will be headed for a semester in Paris to study curation. We talked about art and artists (she loves Frida Kahlo) and Europe (she’s never been) and her excitement about the adventures that lie ahead (highly contagious). Eventually she mentioned that she had just been marching with the protesters, and that she was struggling with some guilt over pursuing her dreams overseas while her community was suffering so much here, and yet she said she felt a duty to take advantage of these opportunities for them. She has an autistic brother, 17, who she fears will make an easy target for police violence, not just because of his race but because his disability makes interpersonal communication so difficult for him. She is not wrong about that. I listened for a while, and did not interrupt, until she shared that she was really torn between being a committed activist and “curling up in a ball in bed.” Wait, I said. Those things are not mutually exclusive. And I urged her to curl up in a ball in bed exactly as often as she needed to, to mourn, to rest, to reset. There is no shame in tending to your own garden. We hugged, I wished her well and parted. 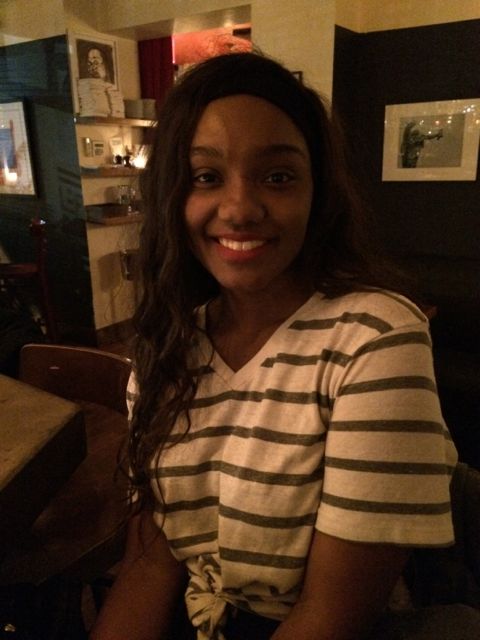 We may well lose her to Paris, and that would be our great loss. Who could blame her? Any future she may have stateside is up to us—all of us.

Earlier that evening, I had posted to Facebook a photo of police helicopters swarming the skies above Manhattan. Later on, I would have a fitful night’s sleep, awakened over and over by the sounds of sirens blazing and helicopters roaring. This is nothing, I reminded myself, compared to the nightmare that will never end for the families and friends of those unjustly killed by police with impunity.

I hope you will get involved, and stay involved. I may well be curling up in a ball in bed today.

The helicopters are still in the skies. 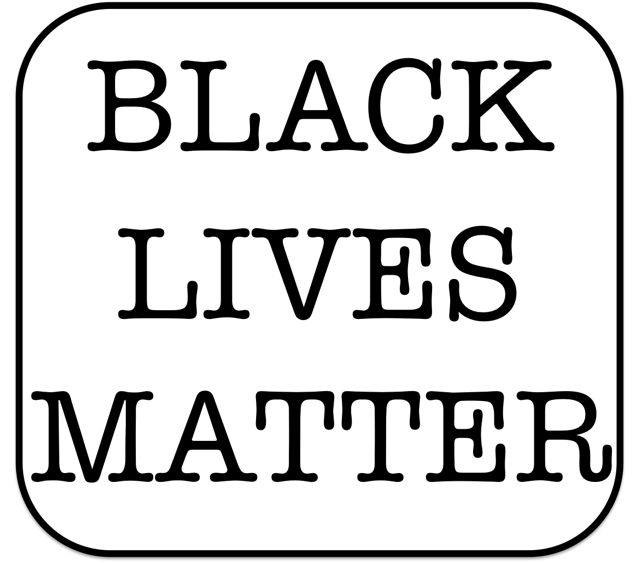 [a version of this post appeared at perry street palace.]