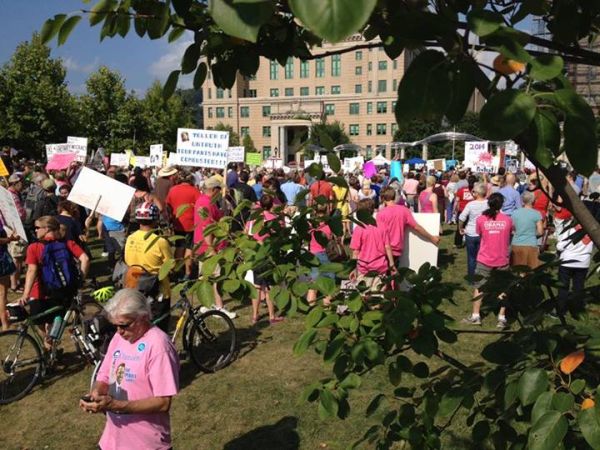 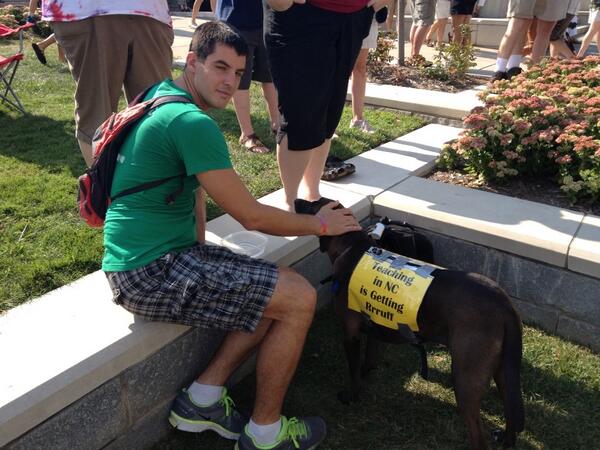 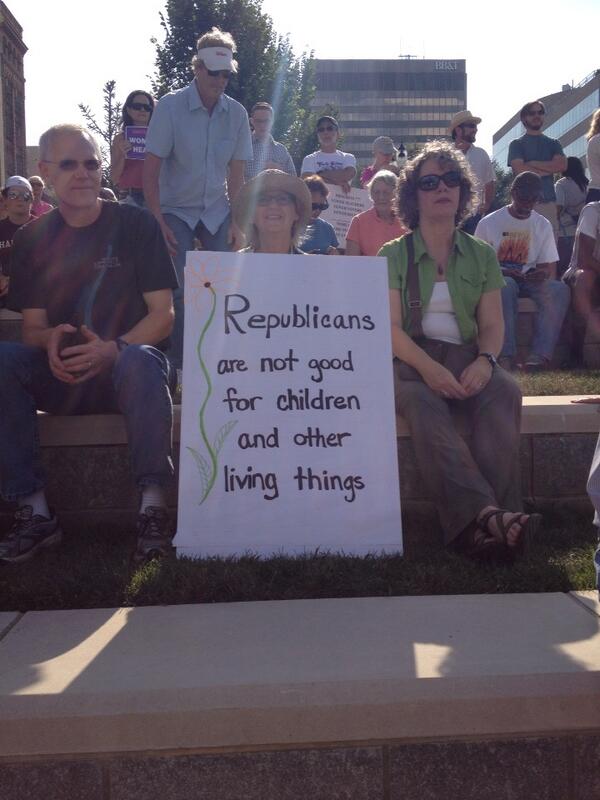 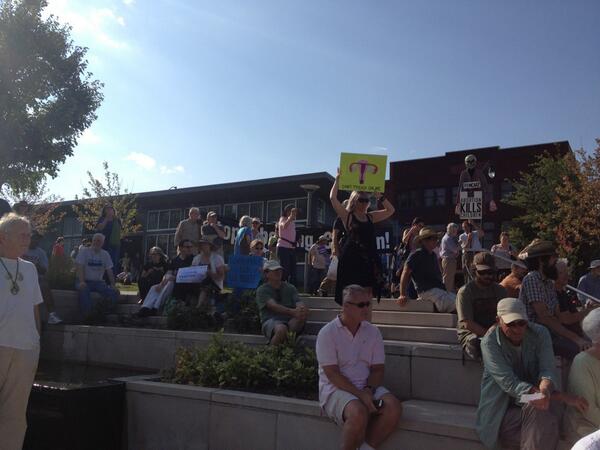 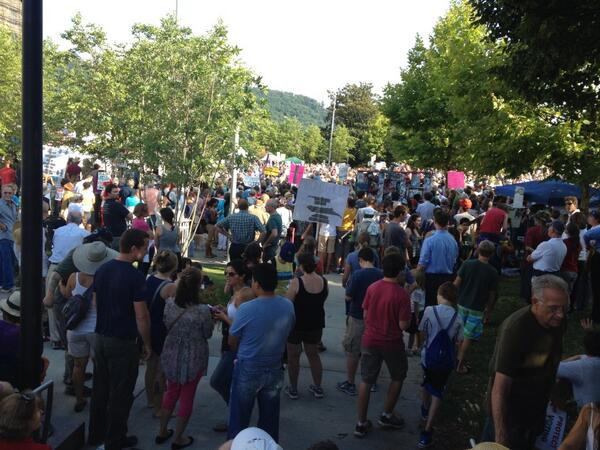 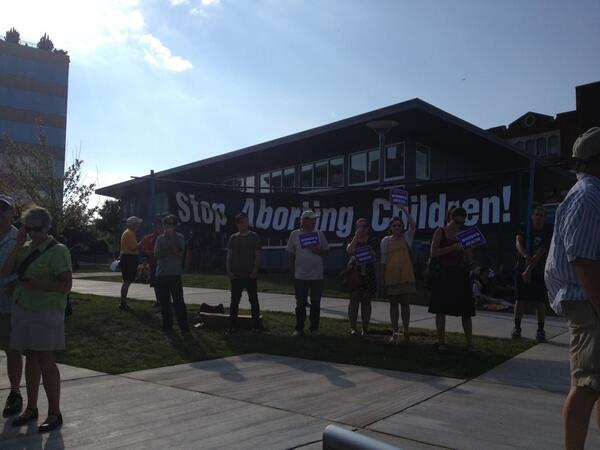 The Center for Investigative Reporting released a report indicating that nearly 150 inmates in two California state prisons were sterilized without state approval between 2006 and 2010. The tubal ligation procedures were in violation of prison rules, but according to a database of contracted medical services for state prisoners, the state paid doctors $147,460 from 1997 to 2010 to perform these sterilizations. Worse, former inmates interviewed for the story reported that prison medical staff coerced the women, allegedly based on their likelihood of returning to prison.

“This apparent targeting of women in prison and coercing them into sterilization––without state approval––is reminiscent of the eugenics practices of the early 20th century,” said Secular Woman President Kim Rippere. “These women have been manipulated and robbed of their reproductive rights at a time when they were most vulnerable.” The sterilizations echo a disturbing past for the state of California in particular. “Between 1909 and 1964, about 20,000 women and men in California were stripped of the ability to reproduce – making the state the nation’s most prolific sterilizer,” reports the Center for Investigative Reporting. “Historians say Nazi Germany sought the advice of the state’s eugenics leaders in the 1930s.” Racial minorities, the disabled, the poor, criminals, and the mentally ill were targets of compulsory sterilization laws in California and 31 other states.

The number of incarcerated women is increasing at nearly double the rate of men in the United States, with a high number of nonviolent, drug-related offenses; female inmates have disproportionately prevalent histories of physical and sexual abuse. African-American women are three times more likely than white women to be incarcerated, while Hispanic women are 69 percent more likely to be incarcerated. In the context of these alarming numbers, these recent findings of coerced sterilizations in California prisons seem to be  merely a continuation of California’s dark history of eugenics.

Secular Woman decries this abuse of women already in the vulnerable position of incarceration; we support every woman’s right to body autonomy and are gravely concerned at this attempt to control reproduction by selectively sterilizing groups considered to be unfit to procreate. Tubal ligation is a major surgery for women under the best of circumstances––much more invasive than vasectomy for men––requiring general anesthesia and, also, unlike vasectomy, is irreversible. Reports from former inmates indicate that many were coerced into sterilization while under sedation, in labor, and often based on inaccurate advice regarding their risk factors––for example, based on the idea that women who have had multiple C-sections should be sterilized. “Dr.Carolyn Sufrin, an OB-GYN at San Francisco General Hospital who teaches at UC San Francisco, said it is not common practice to offer tubal ligations to women who’ve had one C-section,” the report stated. “She confirmed that having multiple C-sections increases the risk of complications, but even then, she said, it’s more appropriate to offer women reversible means of birth control, like intrauterine devices or implants.”

This attempt to selectively control women’s reproductive choices has extremely disturbing social and medical implications; furthermore, shaming women into a serious and permanent medical procedure that will impact the rest of their lives is the height of unethical behavior. Secular Woman hopes that, as a result of these findings, swift action will be taken to ensure transparency and proper acquisition of approval for medical procedures in U.S. prisons, to prevent unethical physicians from taking advantage.

Secular Woman opposes all attempts to criminalize or limit access to comprehensive reproductive services such as contraception and abortion.

The following picture was posted on Secular Woman's Facebook page: 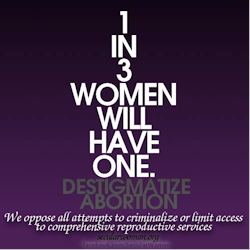 One of the respondents to the picture stated that she was one of the "1 in 3" that had chosen to have an abortion and she didn't regret it. When asked to elaborate on her reasons, she wrote the following and gave us permission to publish it here:

It was legal, and it should remain so. It should also be more accessible. There are too many stresses on women and their families regarding abortion, a simple medical procedure that is as safe and helpful. Extremists, whose beliefs and fears should be kept more private, are far more concerned about potential life than about the actual lives and circumstances of contemporary families. THAT is MOST unethical and based in emotionalism and irrationality, not in rational concern for humanity and the family, be it nuclear or other.

It was the most ethical choice. The foster care system was and is overburdened and there were already far too many children who needed loving homes stranded in the system. Considering all of the problems with overpopulation and the environment; overburdened health care, foster care and social service systems; and diminishing opportunities for women, who were then making less than 60 cents to every dollar a man made, how could it not have been the most ethical choice for a single woman with no college degree, an unsupportive boyfriend and an estranged family? I'd have more time, energy, and resources – both economic and emotional – to devote to the care of my only child who was born later, when I was ready to be a mom. I'd have a child who was a WANTED child.

I did not have to bring a child into the world whose father was not ready or willing to be a good father, much less a good boyfriend or husband. He did not want anything to do with the child that would have resulted if my pregnancy was carried to term, which I considered doing. I was not compelled to marry an incompatible and emotionally unhealthy partner who wanted absolutely nothing to do with my pregnancy, much less prenatal care.

The government and/or adoptive parents did not get another mouth to feed due to my extremely low income and inability to care for an unplanned family. The government and I did not have to contend with bringing up a child that would have been born unhealthy or deformed due to a variety of predisposing factors, both hereditary and environmental, such as being on the pill when the pregnancy occurred, being a smoker, etc.

The potential for abuse – greatly increased when non-natural parents are involved in a child’s care and upbringing – was eliminated.  The short-term pain of having an abortion would never match the long-term suffering of  spending a lifetime wondering whether or not the child I had brought into the world would be wanted and well-cared for by the adoptive parents, with whom I would never interact, and who are at higher risk for abusing than are natural parents. Research on the emotional well-being of adoptive children (at the time that I needed an abortion) strongly indicated that adoptive children suffered a great deal more severe psychiatric problems than did those who live with their natural parents. The child was spared not knowing anything about its hereditary health risks, true family history. The child did not have to wonder how much it pained me to let him or her go, and whether or not he or she was in fact a wanted child from the start.

It was MY body and MY choice and MY struggle. 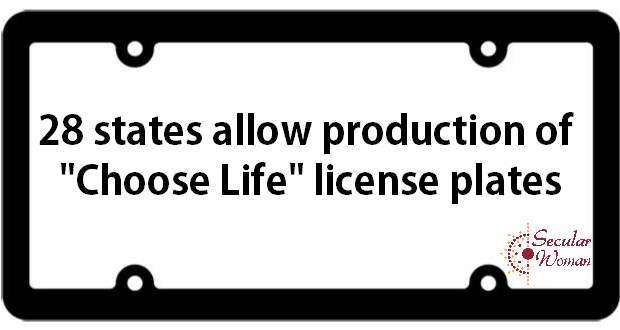