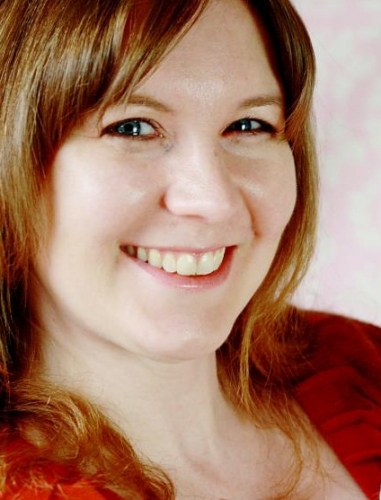 Noelle George is the new Executive Director of Foundation Beyond Belief and is also on the Advisory Board here at Secular Woman. Autumn Reinhardt-Simpson talks with her about her new position at FBB, her goals and her hopes for women in the secular movement.

Autumn Reinhardt-Simpson: Tell me a little about yourself and your background.

Noelle George: Well, I joined the secular movement in 2009 when I founded the SECULAR Center – an organization around secular volunteering. I merged that organization into Foundation Beyond Belief (FBB) in 2011, and I’ve been with FBB ever since. I’ve volunteered with a few other atheist organizations and founded an online atheist moms group as well. Before I got involved in the secular movement, I was a project manager for a large energy company, and I have my chemical engineering degree from the University of Washington in Seattle, WA. Right now I’m living in South Korea with my family because of my husband’s temporary work assignment here. I enjoy reading, music, running, and sleeping. In addition to my role at Foundation Beyond Belief, I also run another secular charity called Secular Avenue.

ARS: What is Foundation Beyond Belief and what does your position there entail?

NG: Foundation Beyond Belief is an organization that allows people to demonstrate and live their humanist values. The main way we do this is via our humanist giving program – people join as members by signing up to give an amount monthly (which can be as low as $5). We select five charities per quarter and the members can choose which of these charities they want their donation to go towards. One hundred percent of their money goes directly to the charities – we don’t take anything off the top for operational costs.

My position is not a new role, but it’s new to me. I will be overseeing the Foundation and its four programs – Humanist Giving, Beyond Belief Network, Humanist Disaster Recovery, and our most recently added program – Humanist Service Corps.

ARS: What are your main duties as executive director?

NG: My most important tasks are overseeing our administration and program operations, fundraising and financial management, and raising the visibility of the Foundation. This includes managing staff and volunteers, overseeing expenses and working with fundraising development, shaping tangible, measurable program goals, doing interviews, forming lasting partnerships with other organizations, and more.

ARS: Are you the first woman in this role?

NG: Yes – Dale McGowan was the founder of the organization and its first executive director. I am succeeding him as the second executive director. I’m proud to say that we have a very good gender balance in our staff, and I am working on increasing our racial diversity as well.

ARS: What do you hope to achieve?

NG: I would like to continue the work that Dale McGowan started by further developing our programs to operate more efficiently and in a self-sustaining manner, raise the visibility of the Foundation both inside the secular community as well as outside, increase the financial stability of the Foundation, focus more on social justice issues, reach out to other organizations in partnership (like Secular Woman), and just generally build on the success of the Foundation so far.

ARS: What is the most exciting thing going on at FBB right now?

NG: Our annual event this year is the Humanism At Work mini-conference, awards dinner, and charity benefit. The theme will be #blacklivesmatter: listen, learn, think, discuss, act. Sikivu Hutchinson will deliver the keynote address, “Colorblind Lies and Morality Myths: Moving Secular Social Justice”. 50% of proceeds from the event will go toward a charity (to be announced in the coming weeks) in line with our theme. And there’s much more in store..

ARS: What is FBB doing about disaster relief in Nepal? How can Secular Woman readers help with that or other initiatives?

NG: FBB activated our Humanist Disaster Recovery Drive almost immediately after the Nepal earthquakes struck. Right now we are supporting Women’s Foundation of Nepal in their recovery efforts. This organization was chosen as one of our beneficiaries for two primary reasons. First, locally run organizations are always best suited to handle recovery, especially in the long-term. Second, the impacts of disasters on women have been widely researched in countries around the world. This research has found that women face more and unique challenges throughout response and recovery – including needs related to health, safety, and economic stability.

ARS: Where do you see yourself in five years?

NG: In five years I’d love to still be at FBB – continuing to grow and refine our programs, adding new and innovative programs, spreading the ‘secular word’, and securing a strong future for both FBB as an organization and the secular movement in general.

ARS: What is one pet project you’d love to do either within FBB or elsewhere?

NG: The other project I have going on is another secular charity organization – Secular Avenue (www.secularavenue.org). We help people who are in an unsafe situation because of leaving religion, coming out as LGBTQ, or experiencing domestic violence. I think it’s very important for us to take care of our own, and many organizations that help people in these situations are religious. There isn’t another organization out there that is dedicated to people leaving religion. When people are especially vulnerable because of escaping an unsafe situation, they don’t need religion pushed on them. Secular Avenue offers a path to safety without proselytizing.

NG: Having our concerns and needs listened to and understood by those already in the community. I see that too often, we try to explain how we are received within the movement and treated by people within the community, and it falls on deaf ears, is rationalized and excused away, or just plain ignored. I think we all need to speak out about our experiences and join our voices together, and continue to support each other in fighting sexism both inside and outside the secular community.

I think that women and other minorities have great potential to make this community stronger and I believe that Secular Woman can be a big part of that by helping raise the visibility of our voices. I think women can be a strong force in the fight for women’s rights such as reproductive rights and that we can help liberate women around the world who are trapped in one way or another because of religious beliefs or religious values.

Secular Woman readers can visit the following links to learn more about and participate in FBB’s other programs:

View all posts by swadmin