“We only have one chance to get it right:” an interview with Fallon Fox

Secular Woman members include many, many women who can be said to truly kick ass, but that phrase has never been more appropriate than for MMA fighter Fallon Fox. The “Queen of Swords,” who specializes in Muay Thai, Brazilian Jiu-Jitsu, and wrestling, has been competing in MMA since 2008 and has a current record of 3-1-0. And as a transgender athlete committed to speaking out for social justice, Fox is as courageous in the face of inequality as she is in the ring. She took the time to speak with SW about her passion for martial arts, her secular worldview, and her feminist values.

JB: I read that you got interested in martial arts as a means of self-defense. What brought you from a functional interest in becoming stronger to a desire to compete in MMA?

FF: I think that one thing that stands out to me often is that I saw other women competing in MMA who inspired me. They were not your "typical" women by our typical, rigid, gender-binary standards. They didn't run away from danger when they had the means to not do so out of pressure from others to conform, and sedate their natural inclinations of aggression. No. They were walking, talking weapons of hand-to-hand destruction in female form. They had what men were allowed to have––what I would have been socially allowed to pursue when I lived in male bodily form. They had techniques of combat, unabashed assertiveness, and unabashed aggression. And they wielded these in front of millions of people unashamed.

Most tuned-in humans on LGBT issues know the devastating statistics with transgender women in regards to violence aimed at them. And I felt less easy at night while walking alone or in certain public situations. I suppose I felt that by following where my new passion was leading me, if I could find the strength to do what those women did on that scale, I might be able to erase or soften the blow of very real potential threats and the fear that comes along with them that was plaguing me on a day-to-day basis. It worked.

JB: Can you talk about your experience as a transgender athlete? What have been the greatest challenges, and have there been any surprises?

FF: It seems that one of the biggest challenges is getting past people's biases and deeply held beliefs that have been handed down to them over years and years of gender oppression. Those beliefs and biases sometimes put impenetrable walls up in the minds of some who don't want to accepts the medical field’s decisions and expertise in the area of transgender people's bodies in relation to sport.

The International Olympic Committee, the LGPA, USA Boxing, US Soccer Federation, USA Track and Field, Women's Flat Track Derby Association, the World Anti Doping Agency, the Florida, and Illinois Boxing commissions, and many, many others have policies in place or have acknowledged transgender participation is fair, legal, and safe for all parties involved if requirements are met. And transgender people have been competing in sports since the ’70s. Therefore this is nothing new, really. It's just not something that is talked about often [due to] stigma on the subject. 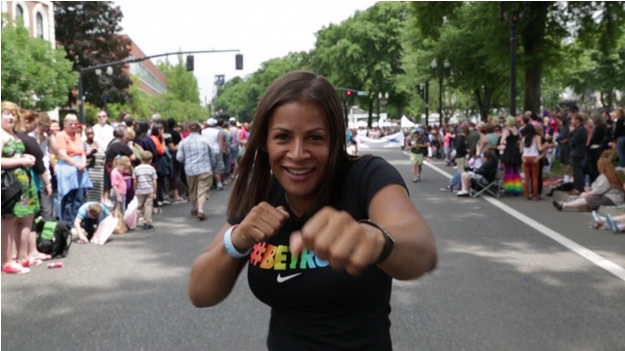 When it comes out that someone is a transgender athlete, of course some people flip because it goes against what most of them have been taught: that one’s gender comes from what is in one’s pants in that precise “magical” moment we leave our mother’s womb. To them, that “moment” affects your brain and your body forever. If gender reassignment surgery could be performed in utero by a priest who said, "I know what's going on," I theorize they wouldn't have much problem accepting our participation in sports. But, as it stands, after one leaves that birth canal it's all set in stone in the minds of some, both physically and, in many cases, mentally. [That’s] a thought process that does not give me warm and fuzzies about prospects for the future of humanity.

I found it somewhat surprising in the beginning when some people within the MMA industry opposed me because of who I am. After all, the sport of MMA has many people within it who tout freedom to do what you want to do, within reason. And I found it ironic that they lost that reason on this subject. But given the track record of humanity I should have seen that coming.

I also found it surprising that my teammates accepted me as much as they did. But, then again they have known me for years before they knew that I was trans. I'm quickly learning to not be surprised by the expression of thoughts and actions of others, and I suspect that they in turn are learning not to be surprised by the expressions of thoughts and actions of me.

JB: When and how did you become a feminist?

FF: The moment I realized the structure of what helps keeps us all––male, female, and anyone else––in chains. The moment that I understood how deeply misogyny hurts all of us. Knowing the more intricate details of all of this sent me digging to find out more, and flabbergasted at how outsiders to the understanding of all this are so ignorant of its significance, or that it exists at all. That rapid mental evolution was a few years ago. I think that fighting in MMA helped me see the world through a new perspective and fast-tracked me a bit on that.

JB: Transgender athletes seem to experience unique scrutiny because sports tend to be seen as so gendered; I'm thinking of trans women, in particular, who have been subjected to all kinds of harassment and privacy violation because of this idea that they have some unfair advantage. Can you talk about how gender and athletics intersect, and what you hope to change in people's perceptions by telling your story?

FF: Gender and athletics should not intersect at all. Meaning, gender––the state of one’s mind being inherently male or female––does not affect the gameplay. The physical, sexual differences of the body do though. We need to have a segregation in much of sports because the gulf of physicality between athletes is so huge after puberty. There are legitimate concerns of fairness and safety that absolutely need to be considered.

But, in the age of talking computers, space travel, and advanced medical research, we have come up with safe, innovative, and accurate methods of augmenting our bodies for people whose mind does not match their sexual characteristics. In this process a person can and will be brought to the competition level of the sex they feel they belong in. A non athletic transgender patient? Ah, upon transition you will become a non athletic version of your newfound physical self. An athletic transgender patient? Looks like you are bound to become an athletic version of your former sex. And that’s not metaphorically speaking; that’s the actual physical reality.

That's really cool, right? In my world that's pretty neat that we can do that. In my world, and the world of many others (including athletic commissions), there is no reason to insert any unnecessary harassment on the patient or athlete for this. Yet, here we are. And I am writing this because of some people are so irrationally minded that they attempt to tell those who are studying transgender people that they don't want to accept their rationally collected consensus.

Telling my story adds to the ever-growing voice that has exploded in the past year on the issue of transgender rights. Those who wanted to ignore the issue and have the trans community suffer in silence are forced to speak about the issue. That visibility forces conversations that need to be had and were previously kept far away from the table.

JB: Do you identify as secular humanist, agnostic, atheist? What brought you to this worldview?

FF: I am an out and proud atheist. I was heavily indoctrinated with evangelical Christianity as a youth. So, you can pretty much get the gist of how this affected my world view in relation to genocide, slavery, animal rights, sexuality, gender and many others. A lot of what I was taught was against the basic humanistic empathy that comes from being a sentient human being that actually cares about her fellow human’s lives and well being. It went against my basic human desire to politely negotiate with other individual humans and groups of people and nations without demands for their assimilation and destruction of their culture.

The idea of being tortured for an eternity for simply not believing in a concept was, and still is, more despicable, sadistic, cruel, and lopsided a punishment for––well, nothing at all. It's a punishment for simply coming to a different conclusion, for simply disagreeing in one’s mind on one particular subject. Understanding the totality of that in relation to being a transgender person sent me into a frenzy of delving into the subject to weigh the validity of the god claim. I soaked up everything I could by both sides to come to my conclusion years ago. In the end, I had to depart from the religious ideas I was taught. I had no other choice to be honest. I was forced by my reasoning to reject the unreasonable.

I suppose that affects my worldview in that I see humanity as being just another animal on a gigantic rock that is slowly, but ever so steadily, hurdling into the sun. That we are all in the same boat. And that the best way to work around the dilemma of withstanding the constant bombardment of threats and pain on this fleck of dust is to focus on the very real and measurable occurrences and individuals within it. We only have one chance, one time to get it right. One chance to make it through with this extraordinary ability of pattern recognition and dexterity to implement invention. We could leave the earth permanently one day and find a new home. We could potentially have most of what we desired in our fictional heaven if we actually try. But, that requires intellectual honesty. That requires courage. We may or may not have what it takes as a species to get that far. Who knows. But, personally I want to do my part to add to the collective of those who understand and embrace reality while focusing on humanities interest in the long term.