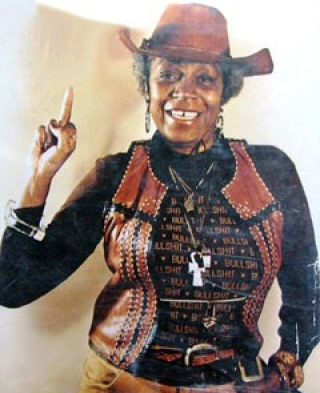 In 1916, lawyer, activist, civil rights advocate and feminist Florynce Rae “Flo” Kennedy was born in Kansas City, Mo., to parents Wiley and Zella Kennedy. The second of five daughters, Kennedy grew up in a mostly white neighborhood, in which her father once stood up to members of the Ku Klux Klan with a shotgun. Kennedy wrote, “My parents gave us a fantastic sense of security and worth. By the time the bigots got around to telling us that we were nobody, we already knew we were somebody.” Finishing high school at the top of her class in 1934, Kennedy opened a hat shop, performed on a radio show and operated an elevator. Her first political protest involved helping to organize a boycott when the local Coca-Cola bottler refused to hire black truck drivers. She moved to New York in 1942, graduating from Columbia University in 1948. In 1951, Kennedy became the first black woman to graduate from Columbia Law School, where she was admitted after threatening legal action on the grounds of racial discrimination. Kennedy ran her own law practice, representing the estates of jazz greats Billy Holiday and Charlie Parker, and the black power leader H Rap Brown, among other Black Panthers. Despite tending to take on cases related to feminism and civil rights, Kennedy eventually realized that she needed to employ broader strokes to battle oppression and effect the kind of social change she had in mind. Turning to political activism, Kennedy cofounded the National Organization for Women (NOW) in 1966. That same year, she established the Media Workshop in an effort to influence the representation of black people in journalism and advertising, threatening boycotts and pickets. At a 1967 anti-Vietnam War convention in Montreal, her speaking career was launched by a fiery invective against the refusal to allow Bobby Seale to discuss racism. Kennedy became known for her vitriolic tirades and incendiary comments, delivered in her characteristic cowboy hat and boots.

Along with feminism and racial equality, Kennedy also championed gay rights, as well as rights for prostitutes and other minorities. In 1971, Kennedy founded the Feminist Party, nominating Shirley Chisholm, a New York Democrat, for president, and helped to found the National Women’s Political Caucus. She founded the National Black Feminist Organization in 1975. Throughout her life, Kennedy championed pro-choice legislation, organizing a group of feminist lawyers to challenge New York State’s abortion law in 1969, influencing the legislature to liberalize abortion the next year. With Diane Schulder, she coauthored a book called Abortion Rap in 1971. While Gloria Steinem is often unwittingly credited with the clever slogan, “If men could get pregnant, abortion would be a sacrament,” Flo coined it. The two were warm colleagues, once going on a feminist speaking tour together. Kennedy was known for her quick repartee. When asked by a male heckler, “Are you a lesbian?” she replied, “Are you my alternative?” Kennedy launched a suit against the Catholic Church in 1968 for spending money illegally to influence abortion legislation, arguing that its campaign violated the separation of state and church. Furthering her efforts to rescind the church’s tax-exempt status in 1972, Kennedy filed tax evasion charges against the church with the IRS. Kennedy was briefly married to Charles Dudley Dye in 1957, but he died soon after. D. 2000.

“It’s interesting to speculate how it developed that in two of the most anti-feminist institutions, the church and the law court, the men are wearing the dresses.”
—Flo Kennedy, from her book, Color Me Flo — My Hard Life and Good Times