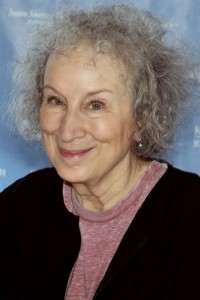 In 1939, Canadian novelist and poet Margaret Atwood was born in Ottawa, Canada. As a youngster, she spent many months of each year in the wilderness with her parents, due to her father’s job as a forest entomologist. She began writing at age 6. Atwood, fittingly, was descended from a Salem woman — Mary Webster — who was accused of witchcraft and sentenced to be hanged in 1685, but was allowed to live after the rope broke. Atwood made her notorious ancestor the subject of her poem “Half-Hanged Mary.” Atwood earned a B.A. from the University of Toronto in 1961, her M.A. from Radcliffe College, and attended Harvard for two years of postgraduate study. She has held a variety of positions at various colleges and universities in North America, including lecturer, instructor, and writer in residence. Atwood has been published in 14 volumes of poetry, including Margaret Atwood Poems (1965-1975), published in 1991. Her novels include: Edible Woman (1969), Surfacing (1972), Lady Oracle (1976), Life Before Man (1979), Bodily Harm (1981), The Robber Bride (1993), The Handmaid’s Tale (1985), Cat’s Eye (1988), Alias Grace (1996), The Blind Assassin (2000) and her latest, Oryx and Crake. She was named Canadian Humanist of the Year in 1987, as well as the American Humanist Association’s 1987 Humanist of the Year. Handmaid’s Tale, about a theocratic take-over of the United States, inspired the 1990 movie adapted by Harold Pinter. Atwood has called herself an agnostic: “A doctrinaire agnostic is different from someone who doesn’t know what they believe. A doctrinaire agnostic believes quite passionately that there are certain things that you cannot know, and therefore ought not to make pronouncements about. In other words, the only things you can call knowledge are things that can be scientifically tested.” (Quoted in Humanism as the Next Step by Lloyd and Mary Morain, cited by Who’s Who in Hell edited by Warren Allen Smith.) Margaret Atwood lives with writer Graeme Gibson. They have three children, and, at last count, one cat.

I was reading the Bible — some of us still do that, you know — and I saw the tale of Jacob and his wives and handmaids, a kind of early Baby M. This is not an attack on Christianity, but the fact is Christians have long persecuted other sects and each other, as they are in Northern Ireland today. People were saying things like, ‘A woman’s place is in the home.’ And I got to thinking, well, how would someone enforce thoughts like that?

Compiled by Annie Laurie Gaylor
Photo by Larry D. Moore under CC BY 4.0