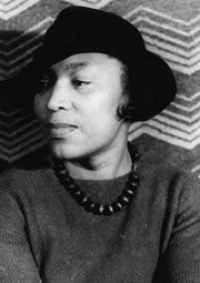 On January 7, 1891, novelist, folklorist and short story writer Zora Neale Hurston was born in Eatonville, Florida, the first all-black community to be incorporated in the United States. Her mother was a country schoolteacher and her father a Baptist preacher who became 3-term mayor of Eatonville. “My head was full of misty fumes of doubt,” she would later write. “Neither could I understand the passionate declarations of love for a being that nobody could see. Your family, your puppy and the new bull-calf, yes. But a spirit away off who found fault with everybody all the time, that was more than I could fathom” (“Religion”). Zora was farmed out to relatives when her mother died in 1904. By 14 she had left town to work as a maid for whites. As a live-in maid she enrolled at Morgan Academy in Baltimore. She attended Howard University, intermittently, between 1918-1924, while working as a manicurist and maid for prominent blacks. She moved to New York City in 1925 with “$1.50, no job, no friends, and a lot of hope,” into the midst of the Harlem Renaissance. Her short story, “Spunk” (1925), brought her notice. Fannie Hurst, author of Imitation of Life (1933), gave her a job. Another white patroness arranged a scholarship for her at Barnard College. Hurston graduated in 1928 and did graduate study at Columbia, where her talents caught the eye of an anthropology professor who suggested she incorporate anthropology into her writing. A commission by a wealthy white patron to collect folklore stymied her career, since the contract barred Hurston from writing. In 1933, Hurston wrote her best-known story, “The Gilded Six-Bits.” Her first novel, Jonah’s Gourd Vine, debuted in 1934, followed by Mules and Men (1937), Tell My Horse (1937), and the classic novel Their Eyes Were Watching God (1937). In all, she wrote seven books, plus her memoir, Dust Tracks on a Road (1942). Many of her short stories were published in magazines and anthologies. Hurston married twice, but neither marriage lasted. Hurston was forced to take diverse “day jobs” to support her writing, from working as a drama instructor at North Carolina College for Negroes at Durham (1939), to working as a maid once again in 1950. She suffered a stroke in 1959, died in 1960 at a welfare home, and was buried in an unmarked grave in a segregated cemetery in Fort Pierce, Florida. Writer Alice Walker revived interest in Hurston in the 1970s. A Zora Neale Hurston reader, I Love Myself When I am Laughing . . . and Then Again When I am Looking Mean and Impressive, was published in 1979. The Complete Stories came out in 1995.

Strong, self-determining men are notorious for their lack of reverence.

. . . Prayer seems to me a cry of weakness, and an attempt to avoid, by trickery, the rules of the game as laid down. I do not choose to admit weakness. I accept the challenge of responsibility. Life, as it is, does not frighten me, since I have made my peace with the universe as I find it, and bow to its laws. The ever-sleepless sea in its bed, crying out ‘How long?’ to Time; million-formed and never motionless flame; the contemplation of these two aspects alone, affords me sufficient food for ten spans of my expected lifetime. It seems to me that organized creeds are collections of words around a wish. I feel no need for such. However, I would not, by word or deed, attempt to deprive another of the consolation it affords. It is simply not for me. Somebody else may have my rapturous glance at the archangels. The springing of the yellow line of morning out of the misty deep of dawn, is glory enough for me. I know that nothing is destructible; things merely change forms. When the consciousness we know as life ceases, I know that I shall still be part and parcel of the world. I was a part before the sun rolled into shape and burst forth in the glory of change. I was, when the earth was hurled out from its fiery rim. I shall return with the earth to Father Sun, and still exist in substance when the sun has lost its fire, and disintegrated into infinity to perhaps become a part of the whirling rubble of space. Why fear? The stuff of my being is matter, ever changing, ever moving, but never lost; so what need of denominations and creeds to deny myself the comfort of all my fellow men? The wide belt of the universe has no need for finger-rings. I am one with the infinite and need no other assurance.